To steal a line from football, here at MTwallets it’s about more than just, “X’s and O’s”. By that I mean more than just fascinating engineering and science problems to share and solve. Reading is a passion here too. History and biography in particular, but also good fiction.

I’ve been wanting to grab from my past-read list and post recommendations for a good read. I wondered what to pick first. Instead, I recently purchased this book at a local bookstore in Stillwater MN (Valley Bookseller). It’s a perfect first foray into reading recommendations here on MTwallets! 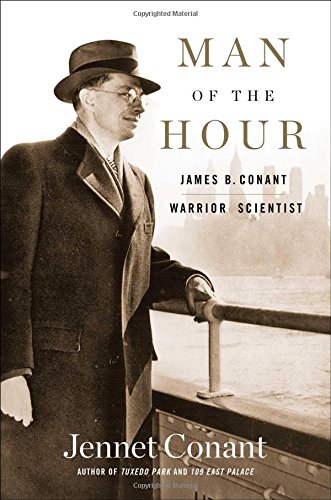 James Bryant Conant was a Chemist from Boston who attended Harvard. As a young, expert chemist he became central to efforts to advance poison gasses for use in WWI as the belligerents raced with this new force in war.

Throughout the 1920s as a Harvard Professor he was a major contributor to Organic Chemistry in an era of advancement in American Science. Into the early 20th century Europe dominated science. Conant was a major force in American chemistry during these early decades of the century.

In 1933 he was a young, historically unlikely choice for President of Harvard. He enacted merit-based reforms and turned Harvard from an elitist, provincial New England college into a magnet for the brightest across the nation. His drive was for excellence, not for pedigree. He became a public voice during the 1930’s. the Harvard Presidency was his platform.

As a public figure with sought after opinions and responsibilities, Conant navigated the Great Depression and its impact on Harvard and the nation in general. In the late 1930’s he walked a line between isolationists who preferred placating fascists over intervention, and others who wanted to immediately fight what did rise: absolute evil in Germany and elsewhere. Campuses were centers of this divide into 1940.

By 1940 he was a war hawk who hit the radio to persuade the public on the absolute necessity to aid Britain and defeat Germany. National and international leaders sought his support for their views and welcomed his activism. He was able to speak out with force before many politicians were, including F.D.R. National leaders needed to wait for the public and congress to come along.

From there Conant became the leader of the Manhattan Project: Openheimer’s boss and Vannevar Bush’s right hand. Conant’s military partner was General Leslie Groves. Bush, Conant, and Groves were the executive staff of the huge industrial undertaking. They are the men who needed to commit to multiple enrichment methods, Plutonium reactors, and two fundamentally different bomb designs as a hedge against failure and delay. The multi-billion dollar commitment was theirs to fail at!

After WWII Conant was active but ultimately frustrated with nuclear diplomacy that failed to prevent the, “nuclear arms race” he feared. His fears became realized as we know. In the early 50’s he became the last High Commissioner of Germany under Eisenhower.  After formal creation of West Germany he served as Ambassador to the new nation.

His last major accomplishment was a vast study of American High School education and work towards reforms. He wrote many books on this subject.

The arch of Conant’s life through major world events and his direct responsibility within so many of them is unbelievable. This biography, penned by his accomplished author granddaughter, is fascinating for what we learn about him, the institutions, government officials, and all the significant history he passed through. It wasn’t, “history” for him! He was central to so many interesting events and efforts!

On a personal level, his in-laws were plagued by mental disease, likely genetic predisposition to bipolar depression. It plagued at least one of his sons. Reading the biography one faces the likelihood that his unbelievable efforts away from home made an already bad family predisposition worse. These are hard but important facts to weigh when we celebrate great achievement of historical significance. The arch of a life we celebrate can soar over many sorrows.

I can’t remember a biography I have read about one person that weaves-through so many interesting topics and times. I strongly encourage you to read this book!